*The Following Press Release Was Issued By Press News Brief*

From popstar to programmer: multi-award-winning artist Redfoo, best known for his band LMFAO’s hit song “Party Rock Anthem,” levels up his passion for coding by teaming up with Radix to evangelize the value, ease and accessibility of Web3 programming

Redfoo and Sky Blu, a dynamic uncle-nephew duo, make up the multi-award-winning musical group LMFAO — one of the most iconic electronic bands — and hit songs — of the 21st century. Best known for their hits “Sorry For Party Rocking,” “Party Rock Anthem” and “Shots,” they have won an array of awards over the course of their stratospheric career. In fact, in addition to being nominated for two GRAMMY awards, LMFAO also hit the number one spot on the Billboard Hot 100 twice. Having made his debut as a solo artist with his album “Party Rock Mansion” in 2016, Redfoo has been continuing on his solo career ever since.

Redfoo’s career took an unexpected turn when, five years ago, he discovered his passion for computer programming. He uses coding and programming as another way to express his creative talent, believing it gives him a different language with which to express himself in the world — much like he does through music. Redfoo exemplifies that anyone, no matter their background of prior interests, can become empowered by learning how to code.

“If I can do it, anyone can do it,” Redfoo urges. His coding captivation has evolved into an interest in blockchain, cryptocurrency and Web3 programming, appreciating the ability of these emerging technologies to create assets for others and wealth for themselves.

These new roads serendipitously led Redfoo to meet Piers Ridyard, CEO of Radix — the first layer-one protocol specifically built to serve Decentralized Finance (DeFi)—at a SXSW digital creative conference in 2022. Radix appealed to Redfoo since it’s a platform that makes programming in Web3 easier by removing complexities and accelerating the learning curve for users. Further, Radix removes the constant threat of hacks and uncertainty that crypto remains safe, making it worthwhile to learn – especially in the current climate. This as recent turbulence in the crypto market has caused many to be unsure about the returns of their cryptocurrencies amid a general — and escalating — lack the patience to witness its benefits.

With Redfoo’s passion for Web3 and Radix’s ability to simplify W3 programming, an unlikely partnership was born. They have officially joined forces, with one result of that being the creating of FooHack — a three day hackathon hosted by Redfoo at the “Party Rock Ranch” (Redfoo’s home) in California. 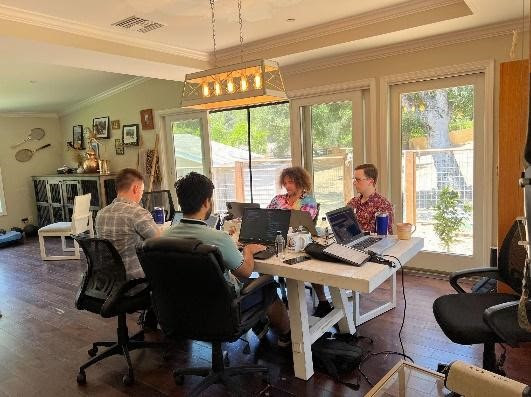 Three lucky members of the Radix Developer community were selected to team up with Redfoo to create a chess dApp on the Radix ledger using Scrypto, which is the asset-oriented programming language developed by Radix. They essentially implemented the logic of a chess game into a Scrypto smart contract, which allowed two participants to play each other according to the rules of chess and that enforced only the rules of chess to be followed (with no cheating). The winner of the chess game would then be automatically minted an NFT to be auctioned off to the highest bidder after the game ended. FooHack was a resounding success and was an inspiration to programmers everywhere. It demonstrated that, with Web3, programming can be much simpler and more accessible than people expect.

Upcoming plans for Radix are community events in Sweden, India, the United Kingdom, Brazil, Vietnam, Germany, Singapore and Lisbon, with each geared toward educating on a variety of crypto topics and encouraging international networking. Radix continues to simplify the process of building Web3 programming and, because of that, Web3 will be significantly more accessible to numerous and varied communities going forward.

Redfoo may be best known as one half of the duo LMFAO, but his music career started long before he began party-rocking with nephew Sky Blu. Born in Los Angeles, Stefan Kendal Gordy — the youngest son of Motown founder Berry Gordy, Jr. — started his career by working with rappers in the L.A. area in the late ’90s, including the Black Eyed Peas . He featured on the appropriately titled “Duet” from BEP’s debut album, which would prove fortuitous almost half a decade later. In 2006, after forming LMFAO, Redfoo and Sky Blu were introduced to Jimmy Lovine at Interscope Records by head Pea will.i.am and were immediately signed. Their debut album, ‘Party Rock,’ was released in 2009, and a year later, they were featured on David Guetta’s remix of “Gettin’ Over You” with another Black Eyed Pea, Fergie. Buoyed by their growing popularity, they released their second album, ‘Sorry for Party Rocking,’ which spawned a string of hit songs and high-profile tour slots. They even performed at the Super Bowl with Madonna. In 2012, the duo announced their hiatus and Redfoo released his first solo single, “Bring Out the Bottles.” He joined the judge’s table on the Australian “X Factor” series and went on to release a steady string of singles, including the Australian hit “Let’s Get Ridiculous.” The high-energy big-beat electro-pop songs continued to roll out through 2015, when he announced his first proper solo LP, ‘Party Rock Mansion.’ Released in early 2016, ‘Party Rock Mansion’ included first single “Lights Out,” a guest feature from Stevie Wonder on “Where the Sun Goes” and “Juicy Wiggle,” which was included on the soundtrack to the Alvin & the Chipmunks movie “Road Chip.”

Radix is the only decentralized network where developers will be able to build quickly without the constant threat of exploits and hacks, where every improvement will get rewarded and where scale will never be a bottleneck. Learn more at https://www.radixdlt.com/.