August 28, 2019 (Los Angeles, CA) — Bella Novela are set to storm Los Angeles with six live shows, that began with a performance at Hollywood’s legendary Viper Room on Friday, August 30th followed by an October residency at downtown L.A.’s Redwood Bar. Their residency will begin Thursday, October 3rd, with five shows and a live performance every Thursday night of the month, and a special Halloween show October 31st. This will be the band’s first Los Angeles residency and will coincide with the release of their new horror-movie-inspired music video “Darkest Hour,” to be released the first week of October. The band will showcase their newest album, Incinerate, which they describe as “an album to reflect the change bubbling up in the current political climate, the #metoo movement, and the general despair felt by the lack of progress in equality. A musical call to arms to incinerate the patriarchy.”

The band’s powerhouse drummer and percussionist, Jannea McClure, emphasizes the significance of performing live as a woman: “It’s easy to feel voiceless and hopeless in the current political climate, so I personally feel like I need the catharsis of screaming and banging on drums just to get through the day sometimes. There’s only so many completely insane headlines you can read before you feel like you’re going to spontaneously combust.” She continues, “It’s a rare and special thing to see a supremely confident woman in a room, making herself be heard, unapologetically commanding the room’s attention. She doesn’t have to say sorry for being loud, aggressive, sweaty, or “unladylike,” and she’s bringing people together with this power. And it’s important to see women and men working together with mutual admiration and respect, especially now at a time when it sometimes seems like men and women are at war.”

With high-energy, guitar-driven melodies, passionate, thunderous female vocals, and rapid-fire, aggressive beats, Bella Novela wear their influences on their sleeves, nodding to the likes of Iron Maiden, Heart, Queen, Abba, The Runaways. Incinerate was recorded and co-produced with Johnny Cerneka in October 2018 at Pot O’ Gold Recording in Orange, Calif. The tracks were mixed at High Noon Recordings and mastered at Infrasonic Sound by Pete Lyman and Daniel Bacigalupi.

Bella Novela is Jackie Laws on vocals and keyboards, Jacob Heath on guitars and bass, and Jannea McClure on drums and percussion. The songs are moody and at times dark, contrasting dramatic vocal harmonies with soaring guitar leads. The band has toured with Fartbarf and Well Hung Heart and  shared the stage with many notable artists including Ariel Pink, Salt N Pepa, Jane Wiedlin (Go-Go’s), Ry Cooder, David J (Bauhaus), Ikey Owens (The Mars Volta, Jack White), Alice Bag, Girl In A Coma, Mike Watt, Chicano Batman, The Dollyrots, Prima Donna and many others.

Several Los Angeles and Long Beach bands will join Bella Novela over the course of their October residency including New Evil, Rats in the Louvre, Los Mysteriosos, Carsex, and more TBA. 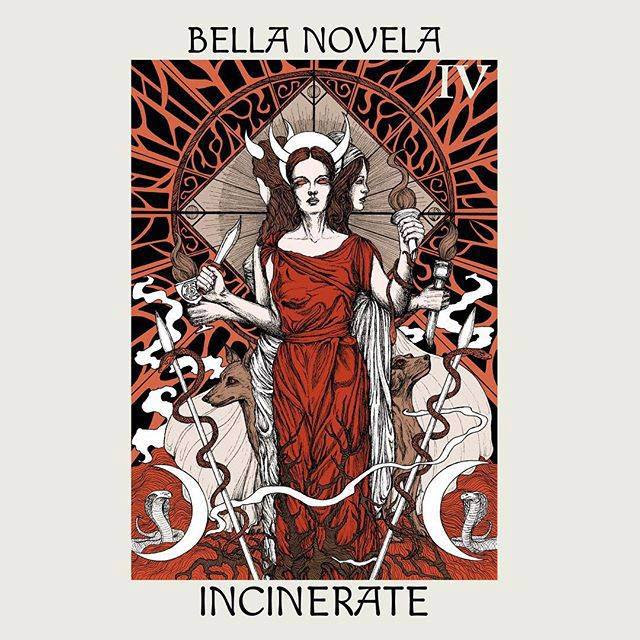