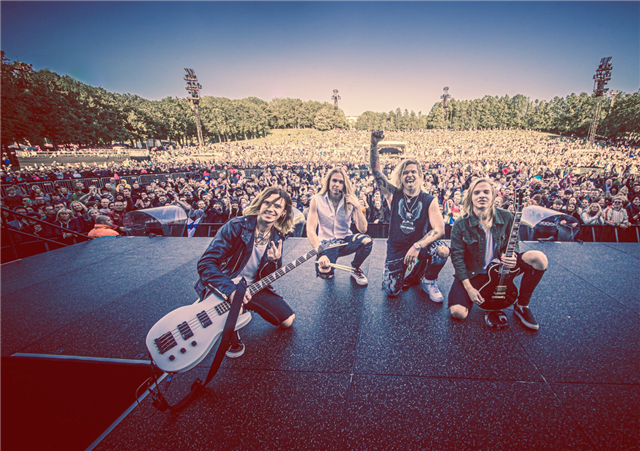 The hard rock group SANTA CRUZ knows how to engage audiences. At the group’s first performance in over a year – which also marked their live debut with new members Pav Cruz (lead guitar), Toxy Cruz (drums) and Ero Cruz (bass) – the band played to a massive crowd of 50,000 fans at a memorable concert in Tallinn, Estonia which also featured Bon Jovi.

The band’s recent string of concerts marked the first live airings of “Changing Of Seasons” and “Tell Me Why,” two recently-released songs that will appear on SANTA CRUZ’s forthcoming album, “Katharsis.” Due this fall, the album – recorded at The Hideout Recording Studio in Las Vegas, Nevada with producer Kane Churko (Ozzy Osbourne, Papa Roach, Five Finger Death Punch) — is sure to please old and new fans alike.

SANTA CRUZ will play the Hollywood show followed by two major fests in the United States: Louder Than Life Festival in Louisville, KY and Aftershock 2019 in Sacramento, CA.

“Katharsis” marks the beginning of an exciting new chapter in the story of SANTA CRUZ, who made impressive waves on both sides of the Atlantic in the five-year period following the release of their acclaimed 2013 debut. In Europe, the group scored two Top 5 albums in their home country, supported the likes of AC/DC and delivered memorable performances at major events such as the UK’s Download Festival. In America, meanwhile, the band appeared on the AXS TV program “Breaking Band,” played notable gigs such as Rock On The Range and the inaugural Motörboat cruise and toured alongside I Prevail, Through Fire, Fozzy, Amaranthe and Sebastian Bach.