TICKETS ON SALE NOW AT WWW.BENPLATTMUSIC.COM

Los Angeles – GRAMMY®, Tony® and Emmy® Award-winning recording artist/songwriter Ben Platt announced that acclaimed multi-platinum indie-pop duo Aly & AJ will be joining all the dates on his highly anticipated fall 2022 “REVERIE TOUR” as special guests. Platt’s biggest North American headline tour, “The Reverie Tour” will kick off Saturday, September 3 at Seattle’s Wamu Theater and concludes on Friday, October 7 at Hard Rock Live in Miami.  Among the tour’s highlights is a hometown show under the stars at the Hollywood Bowl on September 12, as well as Platt’s first-ever headline show at New York City’s Madison Square Garden, on September 27.

Ben Platt said, “I’m beside myself with excitement to finally be back doing what I love, performing my music for a live audience. I’ve been waiting nearly three years to finally take this show on the road and I can’t wait to sing my face off. Aly and AJ are extremely talented musicians and icons and I’ve been their fan for most of my life, so I’m over the moon that they’re coming on the road with me!”

Aly & AJ said, “We are so excited to join Ben on tour! Not only do we admire him as an artist, but he’s an incredible human being and has openly supported our music for some time now. There’s gonna be a lot of love coming from the stage each night.”

Platt’s second solo album, REVERIE, was released on August 13, 2021 and featured the singles “Happy To Be Sad” and “Imagine.” Produced by Michael Pollack (Justin Bieber, Katy Perry) and Zach Skelton (Jonas Brothers, Paul McCartney) with additional production from GRAMMY® Award nominee Gian Stone (Maroon 5, Dua Lipa), “Happy To Be Sad” was met with applause from Billboard, which raved, “(Platt) beautifully illustrates the portrait of a lover having to leave his significant other for a while and simply reveling in the sadness as a source of pure joy.” “Imagine,” produced by multiple GRAMMY® Award-winner Finneas (Billie Eilish, Halsey, Camila Cabello), was praised by Rolling Stone as “moving, inspiring…a powerful new ballad.”

The winner of the 2017 Tony® Award for “Best Leading Actor in a Musical” for his performance as Evan Hansen in the smash hit, Dear Evan Hansen, Platt also received a GRAMMY® Award for his role on Atlantic’s DEAR EVAN HANSEN (ORIGINAL BROADWAY CAST RECORDING) and a 2018 Daytime Emmy Award for his part in the cast’s powerful performance of “You Will Be Found” on NBC’s TODAY. Platt reprised his role as Evan in the Dear Evan Hansen film, released in September 2021.

Platt’s evolving body of work also includes memorable roles in the Tony® Award-winning original Broadway production of The Book of Mormon, the blockbuster films, Pitch Perfect and Pitch Perfect 2 and the acclaimed Netflix series The Politician, which earned him a Golden Globe nomination for “Best Actor in a Comedy,” among many others. Platt made a guest appearance on FOX’s The Simpsons and began filming Merrily We Roll Along with Beanie Feldstein, directed by Richard Linklater, which will be shot over the course of 20 years. Ben can also be seen in BJ Novak’s 2021 anthology series, The Premise. Ben’s latest film, The People We Hate At The Wedding, where he stars alongside Kristen Bell and Allison Janney, will be released on Amazon later this year.

Recently, at the 2022 GRAMMY Awards in April, Platt joined Cynthia Erivo, Leslie Odom Jr. and Rachel Zegler for a stirring tribute to Stephen Sondheim during the “In Memoriam” segment of the ceremony. Platt opened with a moving “Not a Day Goes By” from 1981’s Merrily We Roll Along.

Indie pop darlings and celebrated songwriters Aly & AJ dropped their most recent album, a touch of the beat gets you up on your feet gets you out and then into the sun, last year to critical acclaim with Vogue calling it “the feel-good album of the summer,” V Mag saying it “proves that they’re still just as badass” and the Wall Street Journal declaring that it “looks forward to sunshine and summer days and recalls the jangling guitars and warm soundscapes of Fleetwood Mac.”

A sonic rebirth soaked in the SoCal sun, a touch of the beat… ushered in the next era for the beloved duo and led to a main stage slot at the 2021 Lollapalooza, performances on Good Morning America, Jimmy Kimmel Live! and Full Frontal with Samantha Bee and high-profile interview spotlights with NPR’s Weekend Edition, Rolling Stone, Billboard, Vanity Fair, NY Magazine and more. In advance of their fall run with Ben Platt, the duo will appear at several festivals this spring and summer, including The Governors Ball and BottleRock and they are also currently on the road as part of their “A Touch Of The Beat” North American headlining tour. 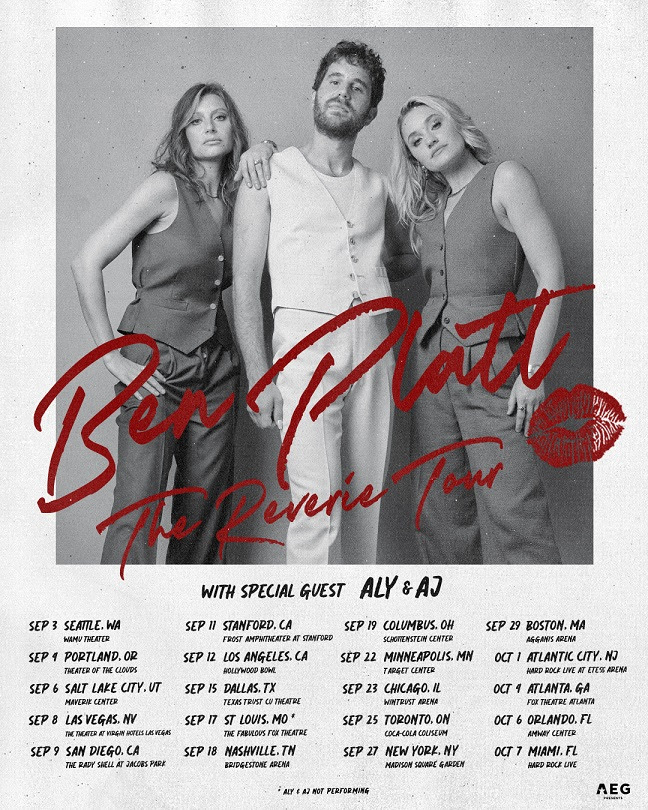