*The Following Press Release Was Issued By Fathom Events* 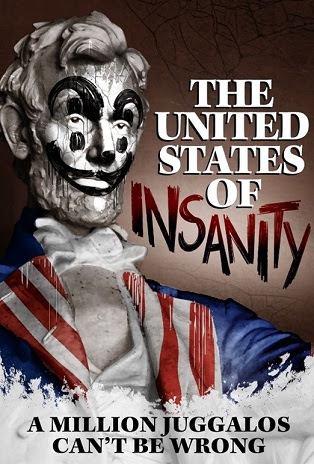 “The United States of Insanity,” the outrageous first amendment rights documentary featuring the Insane Clown Posse (ICP) is heading to select movie theaters nationwide for only one night this fall. In the film, ICP, aka “The World’s Most Hated Band,” find themselves as unwitting warriors for the First Amendment when they, with the help of the ACLU, take on the FBI after they and their one million fans are labeled a gang organization by the FBI. This exclusive one-night premiere event will also include 20-minute, never-before-seen Insane Clown Posse concert footage.

Tickets are available for purchase now at fathomevents.com and through participating cinemas’ box offices. For a complete list of theater locations, visit the Fathom Events website (theaters are subject to change).

“The United States of Insanity” was directed by Tom Putnam and Brenna Sanchez, the award-winning filmmakers behind the hit documentary “Burn” and produced through their company TBVE Films and with Public House Films in association with Hideout Pictures and Realization Films.

The founders of Psychopathic Records and perhaps the most notorious and controversial rap duo in the history of music, ICP rose from being scrubs on the streets of Detroit to becoming bona-fide pop culture icons and Gold and Platinum-selling recording artists. Through sheer hard work and determination, ICP has created a complete entertainment empire, including music, movies, sports entertainment (Juggalo Championship Wrestling), groundbreaking music videos and one of America’s longest-running underground music festivals, the Gathering of the Juggalos. Far beyond a rap group, ICP has proven themselves to be a worldwide phenomenon that will never be forgotten.