*The Following Press Release Was Issued By SIMA*

SIMA SHARES HER VERSION OF 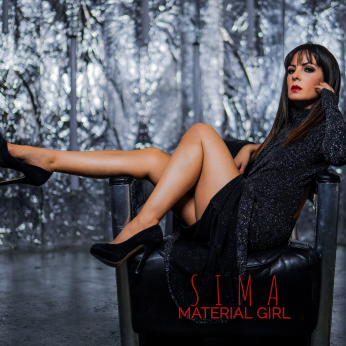 “I decided to cover ‘Material Girl‘ because I loved that song growing up, It was fun listening to and I always loved Madonna’s individuality and creativity and how fearless she was with her creative  process. She really pushed the envelope with her music and videos and spoke her heart and mind. She wasn’t ashamed or apologetic about her sexuality and her ambition and I loved that.”

“I wanted to create a version that is my own and bring my SIMA sound to it,” she shares. “I wanted to  create a different vibe from the original upbeat 80’s song, something darker, captivating with more depth, with strings and keyboard-driven that still have a pop feel to it, but also rock and cinematic vibes.”

“I felt that there is something so empowering about the song, about a beautiful woman that knows what  she wants. I always saw myself as an artist who likes depth, sending an empowering, powerful message  through my music and my voice and this time, I wanted to put the spotlight on the lyrics from this point of my life, not from the point of the young girl watching MTV and seeing this glamorous movie star,” she added.

“There is a dark aspect to our society and our obsession with materialism, money, power, Hollywood and fame. There is this naive message at the end of the video that true love wins no matter what and it’s not always about money and sometimes, I wonder if that’s true, especially in this day and age.”

SIMA’s forthcoming album ‘Runaways’ to be released later this year is her second full-length independent album to be released later this year. Pulsating title track “Runaways” is a rebellious song about staying true to who you are and having faith in what you believe in and the empowering need to break free from  all that holds you back from achieving your full potential. “Runaways” represents individuality, empowerment, transformation and freedom and resonates with the chaos and uncertainty the world has been experiencing lately.

SIMA first came to America with a dream of a better life and freedom to be herself and now ignites rock with an incendiary spirit of her own and powerful messages of positivity and strength. Inspired by everyone from Massive Attack, Bjork and The Cranberries to A Perfect Circle, System Of A Down, Pearl  Jam and Alanis Morissette, the Los Angeles-based  singer, songwriter, producer and documentarian  made her musical debut in 2009 with the single “Breaking Down The Walls” followed by her first full-length album This Is My Truth in 2012 and the EP Beautiful Liar in 2014. With her follow-up album  Runaways, which is propelled by a soaring soundtrack of hypnotic hard rock and rousing pop, SIMA hits the ground running at full speed with fists raised, eyes open and heart blazing.

“In its flashy and metallic original version, ‘Runaways’ pummels you with power chords and thundering drums while showcasing SIMA’s assertive vocals – a mixture of emphatic pop and commanding rock that combines the poshness of Amy Lee and the roughness of Lita Ford…But when  you doff the leather, peel away the chrome and disconnect the power source ’til there’s nothing left but a piano, an acoustic guitar and SIMA’s raw and vulnerable lyrics, you end up with a dramatic retelling of the same song with surprisingly far more firepower and resonance than the amped-up original.”  – American Songwriter

“[SIMA] is a true talent…I’m excited about her musical future. Her interesting but harsh past only serves as the spark for a fire that is burning red hot.” – Sound Vapors

“Empowering doesn’t even come close to how [‘Runaways’] made me feel listening to those words…It  exudes so much empowerment and freedom.” – I’m Music Magazine