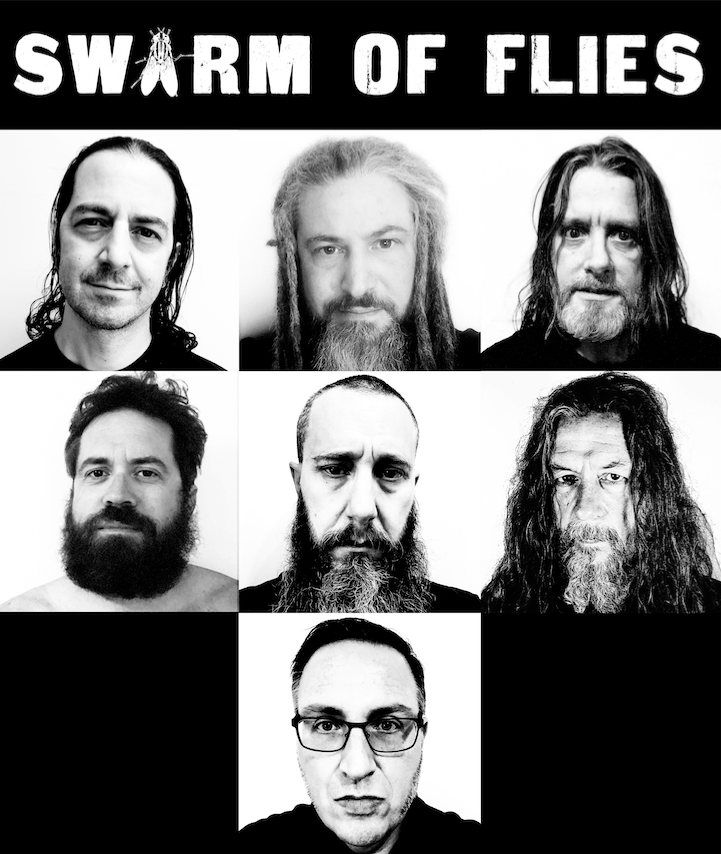 Pandemic-project Swarm of Flies releases first two singles — “Mine All Along” and “The Jaunt,” — featuring members of Eternal Black, Shadow Witch, Clamfight, Witch Taint, Thunderbird Divine, Reign of Zaius and End of Hope.

August 6, 2020 (Brooklyn, NY):     SWARM OF FLIES — a new collaborative musical project created by Ken Wohlrob of New York City’s Eternal Black and End of Hope — have released their first two singles, “Mine All Along” and “The Jaunt.” Both tracks are now available on the project’s Bandcamp page (swarmofflies.bandcamp.com) and are also available on streaming services including Spotify and Apple Music.

The project’s goal is to continue releasing original music during the coronavirus pandemic while the members’ other bands are on hiatus. “As the world ground to a halt, I didn’t want to stop making music,” Wohlrob says. “The more I thought about it, the more I saw it as an opportunity to change the whole damn approach.” He reached out to friends and other musicians he admired, including members of Shadow Witch, Witch Taint, St. Bastard, Reign of Zaius, Thunderbird Divine, Clamfight and End of Hope. Using a collaborative setup, members are able to add layers to the songs, injecting them with their own style and reacting to other members’ contributions. Each track will feature a different lineup from the heavy music/punk rock community.

In addition to the innovative songwriting approach, SWARM OF FLIES will release new tracks via Bandcamp and streaming services as they are created, rather than waiting to release a full-length album.  Currently, this means one new release every month at least through December.

The first single, “Mine All Along,” features Earl Walker Lundy of Shadow Witch on vocals, Davis Schlachter of Reign of Zaius and End of Hope on bass and keyboards, Dave Richman of Witch Taint, End of Hope and Saint Bastard on drums, and Wohlrob on guitar. A swaggering, heavy blues number, the sound is more akin to a Nick Cave & the Bad Seeds murder ballad. “I think Earl’s vocal performance is spectacular,” says Wohlrob. “For my money, he’s one of the most dynamic frontmen in heavy music and he’s got so much soul in his voice.”

Next up is “The Jaunt,” which features Andy Martin from Clamfight on vocals, Erik Caplan from Thunderbird Divine on guitar, drones and harmonica, Schlachter on bass, synthesizer, and piano and Wohlrob on guitar, Moog, and programming. “This song is a strange one and the journey it went through from a somewhat minimalist dirge into a sort of space-rock epic speaks to the collaborative process,” Wohlrob says. “’The Jaunt’ initially arrived as a sort of a puzzle challenge from Ken,” adds Caplan. “The song is in an awkward key, and it’s in a janky time signature.” According to Martin, “Lyrically, ‘The Jaunt’ was born of a collision between astrological alignments of Neolithic monuments, the Space Race during the Cold War and the Repo Man soundtrack.”

Both tracks were mixed and mastered by the team of Joe Kelly (“The Jaunt”) and Kol Marshall (“Mine All Along”) of Suburban Elvis Studios, who have also produced albums for Eternal Black and End of Hope. In addition, Marshall has a long history of production credits including King Diamond, Mercyful Fate, Ministry, Usurper and Absu.

About END OF HOPE:
Formed in 2018, End of Hope brought together four musicians from well-known New York City-based bands who wanted to combine the intensity of Black Flag with the speed rock n’ roll of Motörhead. The band consists of Davey Gunner of New York Hardcore legends Kraut on vocals, Dave Richman of the one-man sludge-and-doom project St. Bastard and black metal band Witch Taint on drums, Davis Schlachter of Brooklyn’s ape-rock purveyors Reign of Zaius on bass, and Ken Wohlrob of Brooklyn doom heavyweights Eternal Black on guitar. Shortly after they formed, End of Hope released a two-song EP, titled D E M O, in March of 2018 and then followed it with their debut album Cease & Destroy in November 2019. Part of the reborn New York Hardcore scene, End of Hope has twice played the Back to the NYHC Roots series organized by Drew Stone at A7, the birthplace of New York Hardcore.