“THE BONNY” FROM FOLK ROCK TROUBADOUR GERRY CINNAMON
DEBUTS AT NO. 1 ON THE UK & IRELAND ALBUM CHARTS 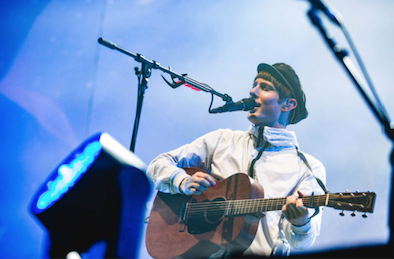 APRIL 24, 2020 – LOS ANGELES, CA – Scottish singer-songwriter GERRY CINNAMON is a superstar stadium headliner and cult hero in the UK, whose live shows have become legendary, joyous mass fan singalongs inspiring devotion and a dedicated following that has swelled via word of mouth to epic proportions. See a clip of his explosive live show HERE. He has taken homegrown Glasgow tales and shared them with the world to rapturous applause on his fiery sophomore album The Bonny released on April 17th via his own label Little Runaway Records. The Bonny debuted at No. 1 on the UK & Ireland Official Album Charts with 29,000 UK first week scans – topping CD, vinyl and download charts.

The Bonny‘s singles amassed 53 million streams pre-release, with seven tracks from the album in the Top 200 Singles chart in the UK. The Bonny debuted at No. 1 on both iTunes & Amazon Albums UK and Top 200 Albums and #7 Alternative Albums on iTunes U.S., Gerry was the cover of Apple’s global New Music Daily, the cover of Spotify’s New Music Friday in the UK and The Bonny is the fastest-selling vinyl album of the year in the UK. The Bonny follows Gerry’s 2017 UK Top 20 debut Erratic Cinematic that is certified Gold with 180,000 sales and over 190 million streams in the UK, and Gerry’s collective career streams total over 230 million. All achieved while remaining resolutely independent.

The word Bonny is Scottish for both “beautiful” and “bonfire” – whose duality perfectly encapsulates the complex ethos of the album. The Bonny’s captivating singles “Dark Days,” “Sun Queen,” “Where We’re Going,” “Canter,” “Head In The Clouds” and the title track give a glimpse into Gerry’s inspiring artistry. Influenced by luminaries like Johnny Cash, Bob Dylan, John Prine, Pink Floyd, Beck, Neil Young, Billy Connelly and Otis Redding, The Bonny boasts twelve anthemic tracks laced with social commentary, personal stories and propulsive poetry. As a lyricist, he has a flair for being able to express universal emotions in a manner that’s raw, real and relatable. Armed only with an acoustic guitar, pounding kick drums and loop pedal harmonies, Gerry crafted a huge sound on The Bonny that he wrote, produced and mixed at his home studio in Glasgow.

NME declares, “The Bonny sees the boy firing on all cylinders….there’s more than enough on here to help us dream of better times ahead,” The Scotsman calls the album “A collection brimming with little nuggets of unpretentious empathy….it is Cinnamon’s unvarnished celebration of the simple truths which chimes with the times” and The Guardian effuses, “The Glaswegian has built up a raucous following for his unvarnished acoustic anthems.”

The Bonny is available in digital, CD, vinyl and cassette, with physical formats featuring alternate album covers displaying two different black and white iconic photos from the 60’s and 70’s: One image captures the love between a mother and child as they embrace on the balcony of their high rise apartment and the other highlights the camaraderie between a group of scrappy young lads gathered around a bonny in Scotland. Collectible vinyl editions are available in standard black, orange, red and flame-colored vinyl designs. Special limited edition bundles of the album including signed lyric books and special t-shirts are available exclusively at Gerry’s official website.

Before being postponed due to the COVID-19 pandemic, Gerry’s first-ever U.S. tour was confirmed for Spring 2020 – which included Sold Out headlining shows in NYC, Boston and LA, dates as special guest on the Dropkick Murphys x Rancid Boston To Berkeley II Tour and a performance at the Shaky Knees Festival. Gerry is working on rescheduling his Sold Out UK arena and stadium headlining tour that will see him playing to the largest audiences of his career – with 200,000 tickets sold. Having organically built up a huge following over the past 3 years, Gerry has become the UK ‘s biggest independent artist, and his last tour was second only to Ed Sheeran in 2019 UK tickets sales.